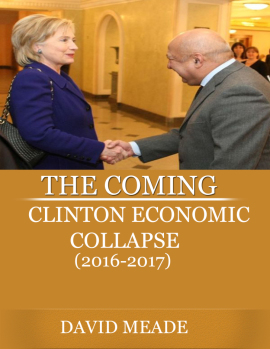 We are very close to financial Armageddon regardless of the outcome of the election, but with Hillary Clinton in power there is a very short fuse. You cannot change the world system, but you can make yourself impervious to it, and you can profit tremendously. You must prepare now.

If you want to have any chance of surviving what is imminent, you must have this book. China is now a net buyer of Silver and has recommended to their 1.4 billion citizens the purchase and saving of this precious metal. It is only one of many alternative investments we explore in this book. You need to get positioned ahead of time. Empower yourself today by buying this book!

Most importantly, this book leads you to the last chapter “The End Game.” This is a detail description of where Clinton policies are purposely and secretly leading America. It is a revelation every American needs to know. The Clintons have been referred to as agents of the “establishment” or the “shadow government” by various commentators. Their hidden agenda, which I believe Donald Trump is very aware of, is revealed for the first time here. The book takes you step-by-step from the outer reaches to the inner core of what is about to befall America.

On November 8, 2016 Hillary Clinton will likely be elected President. Her husband Bill laid the groundwork for the Dot com bubble, and the ruinous hyperinflation of real estate values. NAFTA was another disaster, destroying millions of American jobs. The policies of Hillary will end America as we know it. The economy, already on the precipice, will collapse over the cliff. Massive stock market withdrawals will occur.

In 1999 Bill Clinton repealed the Glass-Steagall Act. The next 7-8 years was the Roaring Twenties all over again. Banks created fraudulent loans – sham transactions including the so-call “Collateralized Debt Obligations” – they actually sold this stuff to the American public and investors. Guess what? In 2008 the house of cards collapsed.

Hillary Clinton is a “New World Order” proponent, and as such she has done major damage to Middle East stability and the safety of Israel. A war is more likely under her than anyone. New World Order people are looking for a one-world government and leader. That idea is as old as the Greek philosophers, and just as wrong. When you put absolute power in the hands of one person, that’s a guarantee of corruption.

Instead of deregulating and drawing on Alaska’s oil, which would make America energy independent, Hillary Clinton relies on failed old-school policies to conquer and control Middle East oil. She has released billions to Iran, which they are using against us – they are the #1 terror state in the world.

Obamacare will devastate the medical community. The USA has the highest debt level of any nation in the world. Under Clinton it will be astronomically higher. Hillary will raise taxes as never before, and run to the bankers for money. I won’t spend time on her track record – Donald Trump has done that. We need to go into survivalist mode from a standpoint of major investment diversification, and right now.