Planet X - God's Endgame: Nibiru and the Book of Revelation 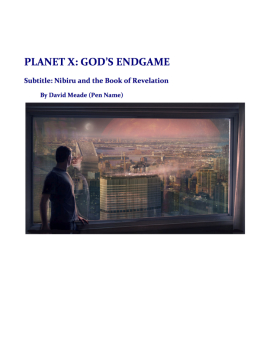 By David Meade. This ebook is available in the following downloadable formats: pdf (for reading on PC or MAC), epub (iPad, Nook, and most ebook readers), mobi (Amazon Kindle).

Planet X was the subject of free and open debate among astronomers and scientists decades ago. Harrington searched for the same object that famous astronomers such as Percival Lowell also searched for. He published a paper on where he believed he would find Planet X and traveled to New Zealand with his own telescope to observe his discovery.

After his trip, Harrington was silenced by a bizarre onset of esophageal cancer and died before he could publish his findings. Following his death, an anonymous obituary stated that he had been disappointed with his research. However, Harrington's widow rejected this notion; she believed her husband was murdered to silence him before he could alert the world to proof of Planet X's existence.

This object -- what we call Planet X -- exists, and it is inbound. How do we know? Both current data and the ancients tell us so. If you've noticed the alarming and ever increasing pace of catastrophic Earth changes, doesn't it make sense to become informed about the root cause?

Why has the US installed a huge telescope in Antarctica (the only real viewpoint for Planet X)? As a Southern Hemisphere observation post, Chile would have been much easier. The South Pole Telescope cost billions and took years to put into operation. The Hubble has been used to monitor this situation with PX very closely and through an observatory in Kilauea Hawaii as well. Planet X is why we have the Seed Vault in Greenland. Planet X is why governments have spent trillions in deep underground bases. This is a book that will take the reader deep into the mystery and the truth.