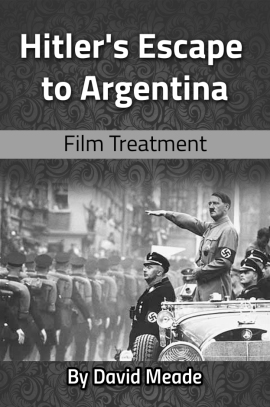 Writing a really solid treatment is rarely taught in standard writing courses. I cover all of the main bases in this book, and I also provide what few other books do—an actual example of a high concept treatment. It's like viewing a chess game after-the-fact. You can learn from the format, the content, the plot points, the description and the story line. Read it not once but several times and you'll learn the form and more importantly, you'll intuitively know what to write about—how to choose a topic—and how to present it.

A newly hired Bureau (FBI) man is sitting at his Los Angeles desk - it's 1954. His name is Gene Hausmann. He is assigned to this "purely a desk job" type of project. He's to collect all incoming intelligence reports regarding Hitler and his escape to Argentina and then just sit on it - classify it so that it never comes out in the open. He is to be "inactive."

But on his own initiative he becomes active, and finds out it is true. When he retires, he tells his son, Frank, the story and the details, and Frank later joins the Bureau himself. His father left him a mandate—to always follow the truth wherever it leads. He does just that, and in the end the hunter becomes the hunted—he knows too much.

The Film Treatment can be described in only a few sentences. During one of his strolls through the Chancellery gardens, Hitler leaves the Bunker area and his double takes his place. What if Hitler escaped Germany and lived out his life in Argentina?