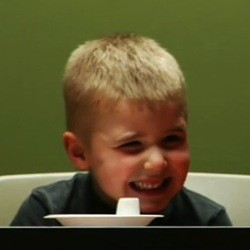 The Marshmallow Tests (Experiments) generally refers to a series of experiments that began in the 60s by researcher Walter Mischel with the latest experiment adding these to studies published as recently as January, 2013.  In these experiments, children were given the opportunity to eat one snack now (one of the snacks was a marshmallow) or wait 15 minutes while the researcher left the room.  When the researcher returned, the child could have two snacks if he or she did not eat the first one.

In the most recent version of this experiment by Kidd, Palmeri, and Aslin (2013), the researchers looked more at the situation than the child's disposition.  In other words, rather than assume the child's will power was the reason for the results, the researchers looked at the reliability of the environment.  The child was presented with a small jar of crayons, and was told that if he or she waited a minute, the researcher would leave the room and get a bigger and better selection of coloring supplies.  In one condition (the reliable condition), the researcher returned with the greater selection as promised.  In the other condition, the researcher returned empty handed and told the child just to use the crappy selection (but they didn't use the word "crappy").  After repeating this with stickers, they conducted the classic marshmallow test.

Of the 600 children that were used (we can say "participated," but in this case that would be more of a euphemism) in the experiment, only about one third waited for the second treat and did not give in to instant gratification.

It has been argued that this might be a bit "cruel" for kids, but I just can't see encouraging a child to wait for something better as being "cruel."

In the Kidd, Palmeri, and Aslin (2013) study, the sample size was quite small—only 28 kids total with 14 in each condition.

Giving in to instant gratification obviously has many deleterious effects in life, as supported by later studies in this series of experiments.  Habits in childhood carry on into adulthood.  This is at least partly avoidable, however.  It is not one's disposition that is fully responsible for the giving in to instant gratification, but it is the situations that influence one to reason that taking the immediate reward would be the best course of action, based on the unreliability of a future, greater reward.