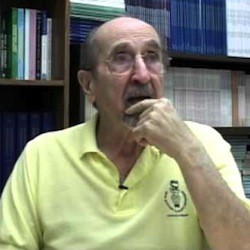 Shortly after the Milgram experiment, Melvin Lerner conducted a study of his own using a similar (ethically questionable—at least by today's standards) ruse involving learning and electricity in the form of painful shocks.

Unlike Milgram, Lerner preferred the ladies—75 to be exact, who were recruited for this study, divided into several smaller groups where the conditions of the study varied slightly.  The basic premise was this: The groups of participants would watch as a learner (a female confederate) would answer questions, get them wrong, and receive painful shocks as a result.  Actually, no shocks were given, the confederate was just a really good actor.  After 10 minutes of watching Lerner's chamber of pain (a recording, which was ostensibly taking place live in the next room), the participants were given a set of instructions, depending on to which group they were assigned. These instructions were as follows:

The subjects who verbally objected to the experiment exhibited much less rejection of the victim, indicating less of a coping strategy to reduce dissonance and more of an action strategy to fix what they perceived as a moral injustice.

The greatest rejection of the victim was seen in the martyr condition.  It appears as if the more noble the victim, the stronger the need to devalue the victim and make the suffering of the victim "just"—at least in the mind of the observer.

The obvious question is: Why did Lerner use all women for this study, and would the results be the same with men?  Although the sample of 75 is decent, these students were divided into the six smaller groups (conditions) listed in the summary.  For example, in the martyr condition, there were only 9 participants.

Blaming the victim is certainly not an uncommon phenomenon.  This practice is strongly associated with those who support the just world theory.  For example, Pat Robertson blamed the 2010 Haitian earthquake on a "pact that the Haitians made with the devil"  (“Why Is Pat Robertson Blaming Haiti? - The Haiti Earthquake - TIME,” n.d.).  While blaming the victim does allow us to relieve some cognitive anxiety and perhaps maintain an illusion of a perfectly just deity keeping score, it interferes with social change and moral progress.

What if Martin Luther King Jr. simply assumed our world was already just rather than encouraging all of us to create a just world?