Foot in the Door Phenomenon

Once someone has agreed to a small request, that person is more likely to agree to a larger request. 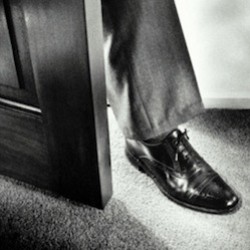 The year was 1966—a time when the term "housewives" didn't make anyone cringe but "civil right" did.  Two Stanford researchers set out to see if what is now referred to as the "foot-in-the-door" technique had any merit.  They conducted two similar experiments with mostly "housewives," as these experiments called on the person at home during the weekday (remember, 1966).

In experiment #1, 156 women, divided into four groups, were contacted by telephone.  The first three groups were contacted twice with a small request first, then a large request the second time.  The fourth group was contacted just once with the large request.  The first three groups varied slightly to identify possible moderating variables such as agreeing to the small request versus actually carrying it out and simply being familiar with the experimenter without agreeing to anything.  The small request was just to answer a few non-invasive questions about household kitchen products (by telephone).  The second large request that came three days later (for the first 3 groups) was that someone would come to their house and essentially raid their cabinets, cataloging all the products.

In experiment #2, 112 men and women (just 7 men... I am guessing the men that were actually home for this were either unemployed or addicted to Howdy Doody—or both) were visited by a researcher who asked them to put a small sign (that promoted safe driving or keeping California clean) in their home window or car.  The groups were divided similarly to the first experiment.  The second request, or the first request for some of the subjects, was to place a very large and unattractive billboard in their yard.

For experiment #1, those who actually took the survey and agreed to the simple request, 52.8% of them actually complied with the second request to let some stranger into their home for two hours to ransack their personal storage spaces.  This is compared to the 22.2% of the people who were contacted for the first time (therefore, did not agree to any first smaller request).

In experiment #2, as in the first experiment, complying with the first smaller request greatly increased the chances that the subject would comply with the second larger request of placing the large eye-sore in their yard.  The surprising result was that it did not matter that the second request was for a completely different social issue (driving safely versus keeping California clean).

The researchers managed to rule out the probability of many plausible explanations by using the control groups. They finally concluded that what may be occurring is a change in the persons feeling about taking action or getting involved in this way (requested by phone or door-to-door).  They become the kind of person who does this sort of thing after complying with the first request and maintain this new self-image, thus complying with the second request.

Several mitigating factors have been proposed over the years that make these findings less remarkable than once thought.  Beaman et al. (1983) conducted a meta-analysis using 15 years of research and found less of an effect due to the different ways the studies were conducted.  This may, however, only demonstrate that we now know more about the mitigating factors that can suppress or enhance this effect.

Salespeople have a field day with this one.  If you are in sales, asking your prospects for a "favor" might help with a later request to buy.  Now that you know this trick, you can be more aware of it when it is used against you to get you to buy a really crappy product or service that you neither need nor want.