The blind following of an authority figure can cause people to do the unthinkable. 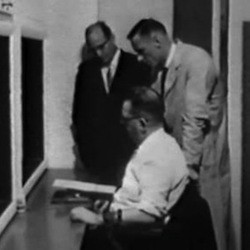 In 1961, men from all different vocations responded to an ad in New Haven, Connecticut for what was ostensibly a study on the effect of learning and memory.  What they did not realize, is that they would make history by being participants in perhaps the most (in)famous psychological experiment demonstrating a "shocking" reality—that what we call evil is inside all of us, easily brought out given the right situation.

The set up: The researcher interviewed two men, one subject and one confederate, explaining that this was a test of learning and memory, to see if negative reinforcements in the form of shocks assisted with this process.  One man would be the learner, and one the teacher.  This was ostensibly established by a random drawing, but the subject was always the teacher—the one that would read the questions and deliver the shocks for each wrong or non-answer.  Meanwhile, the confederate was strapped to what eerily resembled an electric chair, and electrodes were applied for the shocks.  The teacher got an opportunity to experience a very light (15v) shock, just to see what the lowest setting felt like.  After the confederate was strapped in, the teacher went into another room where he could not see the confederate, but could hear him through a speaker system.

Bring on the "pain".  As the experiment begins, the teacher reads the first question, and if the subject gets it wrong, flicks a switch on a machine that looks like a panel on a spaceship from a 1960s sci-fi television show.  The teacher hears a little "ow" that is actually coming from a pre-recorded actor—nobody is getting any shocks, but the teacher does not know this.

Out of the 40 subjects, 26 of them (65%) continued to increased the shocks to the final 450 volt shock.  There was certainly protest by the subjects with threats to walk away, and pleas to check on the health of the learner, but the researcher, with his stoic demeanor, wearing the magic lab coat that resembles that of a respected doctor (or a teenager working behind the photos counter at your local CVS or Walgreens), simply said "please continue" or "the experiment requires that you continue."  These words in this situation are apparently all it takes.

Milgram's experiments were highly criticized for their ethical implications of psychological abuse.  The subjects were obviously under great distress.  Methodologically speaking, these "experiments" were more like "demonstrations" that lacked scientific controls.  Regardless, the implications were clear, and this general finding has been verified and confirmed many times since.

It has been suggested that some of the participants had an idea that the researchers would not let any harm come to other subjects, so suspected some kind of shenanigans.  In other words, in any "real" situation the responses of the subjects might have been different.

Not enough people question authority or "the system," and we blindly obey because we often misplace our trust.  The world is made of leaders and followers, and there is no shame in being in the latter group.  In some contexts, we are leaders, and in some we are followers who trust and respect the person, parents, organization, country, system, religion, god(s) which we follow.  What we often fail to do is ask questions, debate, object, and respectfully dissent in order to "not make waves" or to upload the "virtue" of "having faith" in that which we follow.  Some of history's greatest leaders were the ones who spoke out against authority by having more faith in themselves.