Recording & Producing Your Audiobook vs. Hiring a Professional 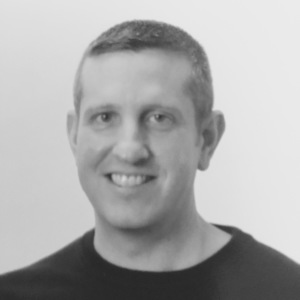 Ryan Levesque served as the President of eBookIt.com from the company’s inception in 2010 through 2019.

Oh, and he occasionally blogs for us, too.

Over the years, I’ve spoken to many an excited author who decided it was time for their book to become available as an audiobook. Some, recognizing their skill resides in the written word, proceeded to hire talent accordingly to narrate and produce their audiobook.

Others took stock and noted they had:

a) a book that they wrote and published,

b) the faculty of speech,

A microphone, of course.

And after a quick visit to Amazon.com, they figured they had just about everything they needed to produce the next chart-topping audiobook.

Of course, there’s a bit more to consider, in terms of skills sets, physical assets, and software.

I’m a believer in keeping it simple, so let’s cut straight to the TL;DR. 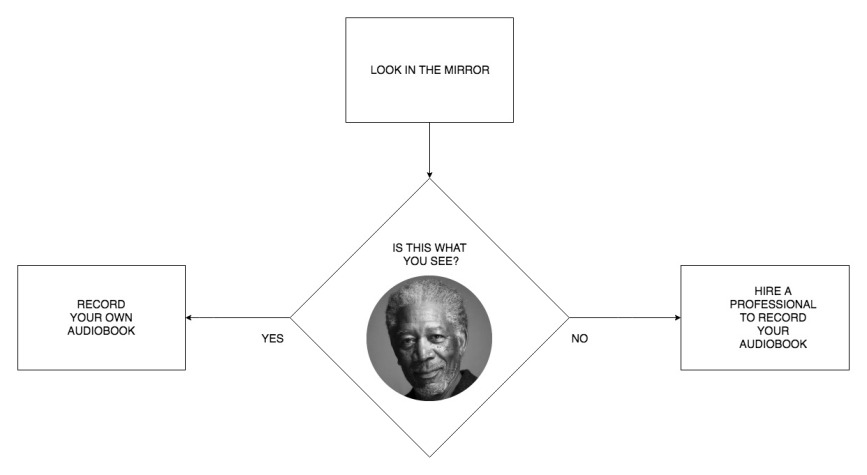 I know, that’s not fair.

We can’t all be Morgan Freeman.

Completely off-topic, but come along with me for a not-so-quick side-journey down a rabbit hole, will you?

While we can’t all be Morgan Freeman, I can imagine a sci-fi story in which the main character wakes up to discover that every other human being on the planet—except our shocked protagonist—suddenly looks and speaks just like Morgan Freeman. You feel me?

He rolls over in bed in the morning.

Goes into the kitchen for breakfast.

His three kids, as they poke at their eggs? Three little Morgan Freemans.

Everyone on the freeway for the morning commute? Yep, all MFs.

His co-workers? Every…last …one of them.

Feel free to steal this story idea and run with it. Include me in the acknowledgments, and send me a copy of it STAT, because I seriously can’t wait to read it. Oh, and if Black Mirror decides to buy the rights, please remember the little guy who sparked your imagination. kk?

Now back to our main topic.

eBookIt’s own intrepid Founder & CEO, Bo Bennett, has recorded and produced many of his own books as audiobooks over the years. These includes his whopping 792-page Year To Success. The audiobook clocks in at 20 hours and 24 minutes—perfect for your next flight from Boston to Australia.

Bo has been podcasting for well over a decade, so he already had a professional studio set-up and the know-how to edit and master the audio.

He’s also appeared on stage as a keynote or other presenter at various conferences over the years. He’s got a pretty darn good speaking voice. 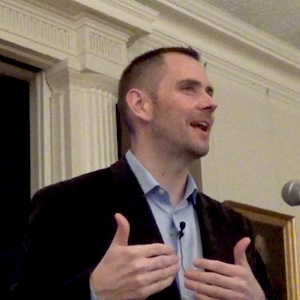 This is Bo saying something smart and witty, and people are listening because he is handsome and has a Ph.D.

A few years back, Bo released a new book and decided that instead of taking all the time to produce the audiobook himself, he’d give a professional narrator a crack at it. He assumed no one would be able to deliver his material quite as well as he would. After all, he’s the author, and knows exactly what he intends, which points should be emphasized, and so on.

Like a smart business person, Bo knows that it makes sense to delegate to someone who can do something almost as well so that he can get on to other more important things. (Case in point: that’s why I’m writing the blog, in case you were wondering.).

When Bo heard the first narrator’s sample, he was gobsmacked by the marked difference between the narrator’s production and his own prior efforts.

Part of the reason for the stark difference is that the professional narrator is “all in” on his or her voice. They approach their their voice as a craft. An obsession. An art and science.

We’re talking about someone who puts food on the table with his or her voice. Someone who not only speaks professionally, but is a voice actor.

And even though Bo’s book was non-fiction (not a book with multiple characters and voices) the professional narrator made Bo’s book come alive in a whole new way.

Nevertheless, Bo is among those who has the chops to pull it off on his own. And there are definitely others out there (including several eBookIt.com clients) who have done a fantastic job recording and producing their own audiobooks.

In addition to having a trained voice, the proper equipment and set-up, there are two other factors that should not be overlooked.

It will take both to get all the equipment set up and work out the kinks.

To help you along the learning curve, Bo wrote an in-depth post a while back (How To Make An Audio Book: A Do-It-Yourself Guide).

Professional voice artist Garry Terzza suggests to those getting started to expect 4 or 5 hours of recording and production time for every hour of finished audio. In other words, expect it to take 40 - 50 hours to produce a final audiobook that’s 10 hours long (which is the approximate audio length for book that’s a little over 90,0000 words). That sounds like both Time and Patience to me.

While it can be expensive to hire someone to produce your audiobook, it’s helpful to understand what you’re getting yourself into when you decide to do it yourself.

If you aren’t up for the challenge, keep in mind that at eBookIt.com's sister company Archieboy Studios, we offer a variety of narrators that are a great fit for many different genres and budgets.

And if you are still ready to take on the challenge of recording and producing your own audiobook, congratulations! Definitely read Bo’s article referenced above. It will save you a bunch of time and frustration.

For most of us, however, the above flowchart just might provide a helpful rule of thumb, after all.

Have you created your own audiobook? Are you happy with the results? I’d love to hear from you!

And, if you took a stab at writing the “Everyone Looks Like Morgan Freeman” story, I like uber-uber want to hear from you!

Ryan Levesque served as the President of eBookIt.com from the company’s inception in 2010 through 2019. Ryan now serves as a Publishing Concierge, working directly with customers to provide customized services (book marketing, one-to-one “hand holding”, video trailers, and more) which go beyond the core offerings of eBookIt.com. Oh, and he occasionally blogs for us, too.

We work with authors and publishers to format and convert books into ebooks, and distribute them to all the major ebook retailers including Amazon, Apple, B&N, Google Play, Ingram, Kobo, Scribd, Baker and Taylor, and our own bookstore. We then work with our clients to promote their books to the media and the public.

As great as ebooks are, as an author, there is nothing like seeing the result of perhaps years of work materialize in a physical book. Holding your book in your hands is one of the greatest feelings of accomplishment any author can experience. This is just one reason print on demand books are as popular as they are.

Imagine your book enjoyed by listeners all over the world, distributed by Audible, the world's leading retailer of digital audio books, through outlets such as Audible.com, Amazon, and iTunes. With the help of eBookIt.com, we can make this possible.

People really do judge a book by its cover. Right or wrong, many readers associate the quality of the writing and the content with the quality of the cover. Don't risk readers passing on your book because of an unattractive cover.

Book marketing and book promotion are real challenges for virtually all self-published authors. Competing for readers is not easy. But we have good news. We have been doing this for over ten years and have a process down that works extremely well.

How To Easily and Profitably Publish and Market Your Book

As founder of eBookIt.com, I have a privileged perspective of what works when it comes to book marketing and promotion, having worked with thousands of authors over the years. In this FREE course, I share this information with you.